What Is A Mobile Application?

The definition of a mobile application (mobile app)

A mobile application generally referred to as an app, is a sort of application software created to operate on a mobile device, like a tablet computer or a smartphone. Similar applications to those used on PCs are routinely made available to consumers via mobile apps. Apps are typically compact, distinct software units with confined performance. Apple Inc. with its App Store, which sells hundreds of programs for the iPhone, iPad, and iPod Touch, popularized the usage of app software. An app, web app, online app, iPhone app, or smartphone app is another name for a mobile application.

The integrated software systems commonly found on PCs are being substituted by mobile applications. Instead, each app only offers a few discrete and constrained features, like a game, calculator, or mobile web browsing. Due to the early mobile devices' constrained hardware capabilities, apps may have avoided multitasking; but, because they let users choose what their devices are capable of, their specialization is now part of what makes them desirable.

Many people associate mobile applications with web-based cell phones from the twenty-first century. They are, however, from the 1980s.

We witnessed the introduction of the Psion Organiser in 1984. The "First Practical Pocket Computer in the World" was this. There were several apps on it, including a clock and a calculator.

"Simon" was a product of IBM in 1994. Emails and faxes may be sent and received by this personal digital assistant. Furthermore, it had programs like a calendar, address book, and meeting scheduler. This is frequently referred to as the first real smartphone in history.

Blackberry introduced its smartphone in 2002. This had email functionality. It immediately became the "must-have" tool for the mobile businessperson.

In 2007, Apple released the iPhone. The App Store was introduced the next year. 500 applications were initially available, 25% of which were free. This had quick success. More than 10 million app downloads in the first 72 hours. A few months later, Google Play was launched. (At first, it went by the name Android Market.) The emergence of mobile apps, as we know them now, was heralded by this.

By 2023, it is expected that mobile app sales would reach $935 billion and even beyond.

There are around 2.87 million applications available for download on the Google Play Store.

There are around 1.96 million applications available for download on the Apple App Store.

Over nine million smartphone apps have been developed since now. Chat applications and social networking apps are the most downloaded categories (90.7% and 88.4%, respectively). Mobile applications for leisure and video (67.2%), mobile commerce (69.4%), and maps (61.8%) are other common categories. Other well-known apps such as Games(50%) and music(52.9%) are also on the list.

49% of individuals open an application 11 or more times each day on average.

Owners of smartphones typically utilize 10 applications per day and roughly 30 apps per month.

Apps for mobile devices come in many shapes and sizes. Let's examine the most common categories of mobile apps to inform you of the newest developments in the mobile app industry.

1. Apps for business or productivity

For instance, educational gaming applications and language learning apps like Duolingo are the ideal tools for youngsters. 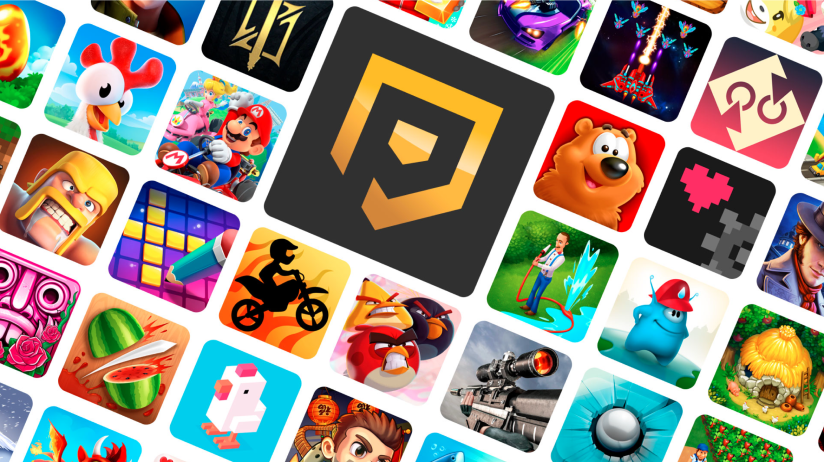 Gaming apps are the most widely used category of mobile applications. Due to the lucrative nature of the industry, businesses typically devote more time and money to creating games and mobile versions of stationary games. 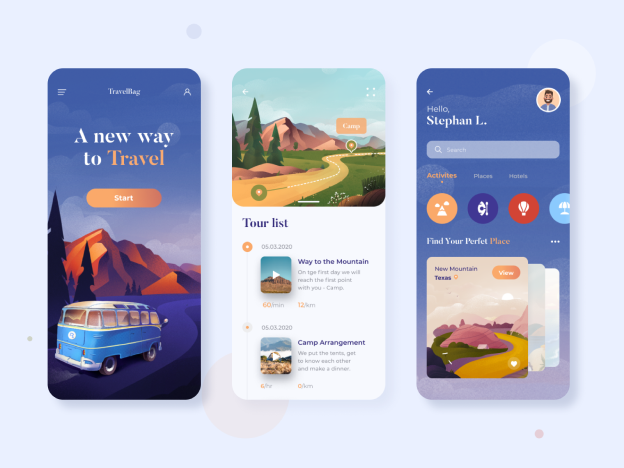 This category of mobile apps' major goal is to make traveling easier for the consumers. Mobile travel applications turn a tablet or smartphone into a trip diary and guide that enable users to find out whatever they need to know in relation to the places they are visiting. The user session lengths for this kind of app concept are the shortest, with users working on it for only as long as necessary before moving on. Barcode scanners, for instance, or health-related apps.

Types according to Mobile App Development

Mobile app development is a procedure used to develop mobile applications for mobile devices including smartphones, personal digital assistants, and business digital assistants. These software apps are designed to function on portable electronics like smartphones and tablet computers. Based on this, we have majorly three kinds of apps.

Web applications and native apps are the two main divisions of apps. When we talk about business or commercial ways we get one more type of application type called a hybrid app. Each offers a different user experience and user interface.

Native: An app that is designed for a specific platform by utilizing the platform's native APIs. As a result, it is fast and has complete access to a phone's capabilities. The infrastructure of the platform, such as an app store, aids in the distribution of the app. The script/code cannot be used on another platform. iOS (Swift or Objective-C), Android (Kotlin or Java), & Windows Phone (C#.NET) are some instances.

For a particular mobile operating system, often iOS or Android, native apps are created. Native apps often go through a considerably more rigorous development and quality testing process before they are launched, benefiting from greater performance and a more refined user interface (UI).

This generally hinders adoption. Native apps are true, by default, not cross-platform since they all undergo a different development process. In particular, they are developed using a coding language developed specifically for handheld devices. The challenges of developing mobile applications and the high cost combined with the scarcity of specialized developers create a development hurdle. 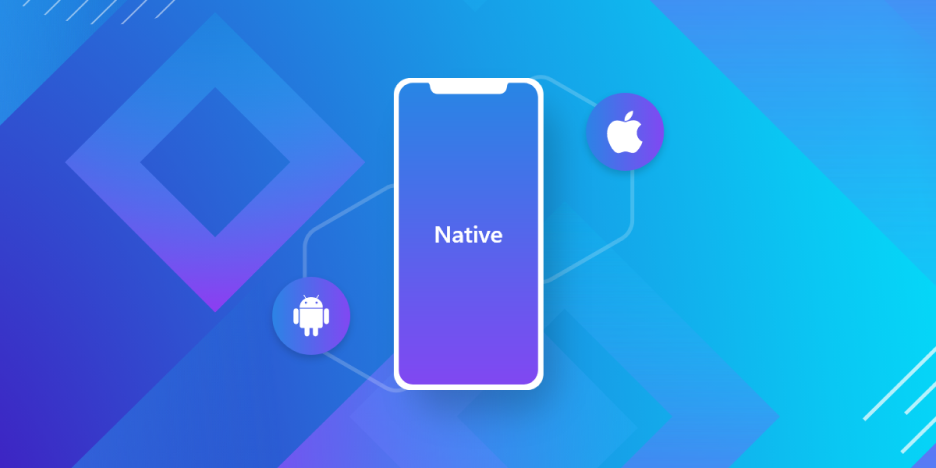 Web applications are employed in HTML5 or CSS and occupy the least amount of device RAM possibly because they operate through a browser. All data is saved on a server-based database and the user is forwarded to a specific web page. A reliable connection is necessary to use web applications.

Web applications have features similar to native applications, along with the ability to send push notifications and access hardware like GPS or webcams. Without the inconvenience of installing or upgrading, the user experiences are comparable to those

of native apps on mobile and desktop platforms, which is quite advantageous. Despite having bad connectivity, they function better.

Web applications are also lightweight and simple to use on mobile devices (as no app store is required), which is important from the end user's point of view. Additionally, they may be changed much more quickly than native apps and are simpler to maintain from a developer's point of view. Alongwith, they are searchable by search engines and are lightweight, unlike native applications, which utilize a different codebase for each device.

A hybrid app incorporates features from both native and web apps, as the name implies. Consider them to be web apps such that they have been placed within the casing (or development) of a native program.

Hybrid apps are downloaded from an app store, like native apps. Once installed on the mobile device, the developer accesses the native platform's features through an embedded browser. Both advantages and drawbacks exist for hybrid apps.

Hybrid applications are simpler to build than native apps, similar to web apps. They do not also have to be created from scratch for every platform. Accessing the development expertise required to produce a hybrid app is made considerably simpler and less expensive by both of these features. Given the significant worldwide lack of developers right now, this can be a crucial factor to take into account. The fact that hybrid applications don't require additional verification after being accepted for inclusion in an app store is a major advantage.

Microsoft's cross-platform Xamarin application employs the programming languages.NET, C#, and F#. IDE of choice is Visual Studio. All functionalities are accessible thanks to the fully native UI/UX. There is a large community using this technology. Additionally, Microsoft releases the same updates through Visual Studio whenever an upgrade is made available for Android and iOS.

JavaScript-based React Native is Facebook's cross-platform solution, and WebStorm & Visual Studio Code are the preferred IDEs. Identical to Xamarin, React Native offers access to all features and has an entirely native UI/UX. Facebook also releases updates on the same day that they do for Android and iOS.

Google's cross-platform solution, Flutter, makes use of the Dart language. Android Studio, IntelliJ IDE, and Visual Studio Code are the IDEs of choice. Every time Android or iOS releases an update, Flutter must create new libraries to replicate those updates since the UI/UX is customized. This affects its development rapidly.

More cutting-edge mobile applications will be seen in the future taking advantage of latest technologies like AR, IoT, VR, drag-and-drop builders, and many more. We hope that this article should have helped you to learn all you need to know about mobile apps and their technologies, kinds, and other aspects of mobile app development.

The top mobile app development firm like Swipecart is where you can contact if you want to produce an app for your company. This company has talented app developers who can make your original ideas for profitable apps a reality.